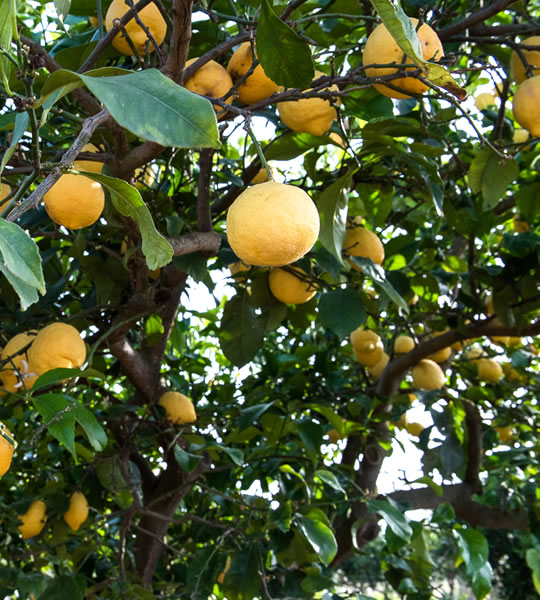 Since appearing in England in the 1500s, lemons have gained the status of kitchen essential: handy and versatile, their zest and juice have long been used to preserve, season, and add perfume and flavour to a wide range of recipes. There’s more to a lemon than it’s zing, though: the variety as much as the growing method and region can make a noticeable difference in the flavour of the fruit.

Lemon trees bloom multiple times throughout the year, each giving way to slightly different fruits. In this sense, lemons do have seasons, but we can have lemons in every season. Each variety has different characteristics: some have thinner, aromatic skin; some are sweeter. The colour of the skin varies depending on growing temperature: when it drops below 10°C, the lemons’ skins will turn deep yellow, and as the temperature rises it will tend to be greener.

The first to come into season is called ‘primofiore’ (‘first flower’, or winter lemons) – from November to March: this is when lemons are at the peak of their season. Primofiore lemons have a thin, bright yellow skin and high juice content.

‘Bianchetti’ (‘little white’) lemons come next, with a short season between March and May. They are smaller and have a zingy, pale yellow skin.

Finally, the ‘verdelli’ (summer lemons) end the cycle from May to October. These are still green when fully mature, and are especially typical of Sicily. They tend to be slightly less juicy than the other two, but their skin is just as aromatic.

We source all our lemons from the market in Fondi, near Rome, where our buyer Domenico selects the best he finds every week. Our lemons come from Amalfi, Calabria or Sicily, depending on time of year and where we find the best-tasting fruits. The selection is made firstly based on flavour, and secondly on juice content. The lemons are then graded by size. We look for certain aspects of appearance, but we don’t look for conventional beauty – rather for tell-tale signs of quality. A few blemishes are not a defect: they are often the indicator that the lemons haven’t been treated. We also only buy lemons with unwaxed skin: this is essential in order to be able to use the zest.

Lemons are fantastic all-rounders, and an ingredient to always have on hand. The list of uses is extensive: dressing, deglazing, preserving, roasting, baking… the list goes on. Not all lemons are created equal, though. Our unwaxed lemons are freshly picked rather than being stored for months, preserving their aroma and flavour until you receive them.

Check out the Natoora shop at Ocado for more exciting seasonal produce.